Nurturing a Love of Music

The choirs of St. Mary’s International School seek to nurture a love of music among their members, with a mission to promote community service and global awareness. Students have the opportunity to rehearse and perform the world’s great classical choral works as well as light, popular works. 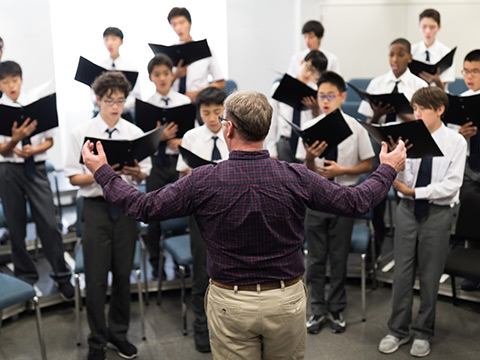 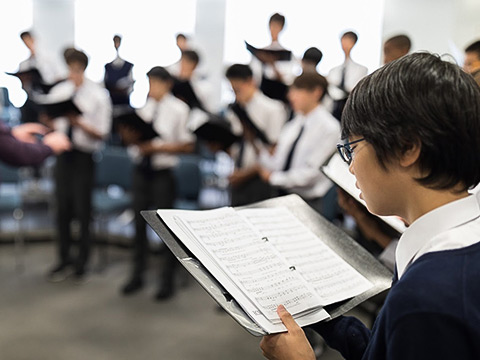 These choirs participate in the Middle School Choral Festival and also perform at the St. Mary’s Christmas and Spring Concerts, as well as at various assemblies throughout the school year. Handbell Choir is also offered as a semester performing ensemble.

The St. Mary’s Handbell Choir was one of the founding members of the Japan Handbell Association nearly 50 years ago. The bell choir has performances throughout the Tokyo area as well as overseas. They have participated in the Heritage Festivals, receiving numerous gold awards for their outstanding performances.

The St. Mary’s Men’s Choir is a non-auditioned group of 115 students from Grades 9-12. In past years, the group has participated in the Heritage Festivals and Pacific Basin Music Festival, where they have received highest rankings, along with the St. Mary’s Varsity Ensemble.

The Varsity Ensemble is St. Mary’s auditioned vocal group that has participated in American Choral Directors Association division and national conventions as well as numerous choral festivals, including the Budapest Choral Competition and Heritage Festival, and the Festival of Gold. They have performed at the opening of the East Asia Regional Council of Schools convention as well as at the International School of Bangkok and the NIST International School. This past summer, they were invited to perform at the Australia National Choral Association Choralfest and the Pemulwuy Men’s Choir Festival in Brisbane.